I would like to let all of you know that the 15 Family program has been extended. Dana Louis (Ko-Falen executive board member) was inspired to continue the project to make sure more people in difficulties here can be helped. Of course we can’t help all Mali, but there are a handful of people we all may know that were not on our original list of people. I am extremely happy to announce that now 22 families have been served. By January 19th, I had already delivered aid to 18 different Families.  Thanks to the most recent effort of Dana with her generous donors, we were able to serve a few more families. 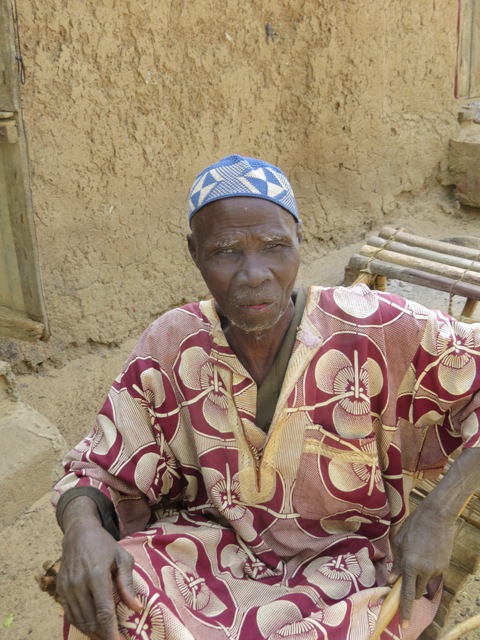 Tiemogo Kamissogo from Soni Cegni known as Djeliba was the very first recipient of this new group. Djeliba’s position in the village is most outstanding; not only because he is an elder, but he is from the line of one of the most important families in the village. His family is the master in the art of speeches, as they are griots/oral historians. Although his real name is Tiemogo Kamissogo, everyone calls him Djeliba in respect of his knowledge of the historical background in the village of Soni Cegni and its surroundings. Djeliba is known to all who have come to Soni Cegni through KoFalen. During the last 20 years, Djeliba made sure all of Kofalen’s messages were well scaffolded before passing them on to the village people, and vice versa. The memory of the way Djeliba has always welcomed us to Soni Cegni and spoke on our behalf is etched in my mind. His memory to some Kofalen people may be from his famous saying “Only this has enough to pay you back for your kindness . Only this!!”– he says these words pointing his index finger skyward.

When I visited Djeliba in his family compound, he was seated with his younger brother Diemory Kamissogo discussing what to do for his eye problems and poor vision. At first he did not recognize me because of his poor eyesight, but his quick memory jumped in as he heard my voice. He indeed was a bit surprised as I had not visited his home all the years I’ve been coming to Soni Cegni. However, Djeliba had no lack of words to praise me. “Heeee Wague!!” he beamed.  Turning to face his brother he continued, “In the name of the Mighty Creator, the son of people has arrived! All of the 4 original ancestors were only given a fist name and they earned their own last name. They are Diallo, Diakite, Sidibe and Sangare.”   He turned to face me again, “You are the son of the entire Africa. He-who-will-never-forget-where-he-came-from. You are the small tree that produces a large shade. You are the one who is expanding the name of Mali across the Atlantic Ocean.  Make yourself welcome at your own house.”   Though  Djeliba is now a bit older and less energetic, his spirit is fully present. Both he and his brother were in shock when I explained to them that I had come to share of the 15 Family program, and handed him the money. Though his eyes were the primary issue at the time, Djeliba’s real concern was lack of food in his family. He noted to me that this horrible time Mali is going through is a so-called “lighting the already dry grass.”  “It is hard to survive old age unless you have a faithful helper,” he added.

Djeliba has been a friend of KoFalen from the beginning, and I am so glad we were able to help him. Once again as Djeliba said goodbye,  he also sent gratitude to all Kofalen members but particularly to his “wives”–my daughters– Penda and Amina. In the end, he said “Only this will pay you back, only this!!”

We have a saying here in Mali, “Even if you have nothing to feed to your new guest, being a good and pleasant host is plenty enough.” Djeliba has been such a person.

Only love from Mali,